Book travel packages and enjoy your holidays with distinctive experience

There are many tour packages available for those interested in celebrating Holi in Mathura and Vrindavan. These packages typically include transportation, accommodation, and guided tours of the cities and their temples. Some Mathura Vrindavan Holi Tour packages may also include cultural experiences such as participating in traditional rituals and ceremonies, or attending performances of devotional music and dance.

If you are interested in booking Holi Tour Packages for Mathura and Vrindavan then you can book the tour now or get all the details by calling on this no. +91-8076786032 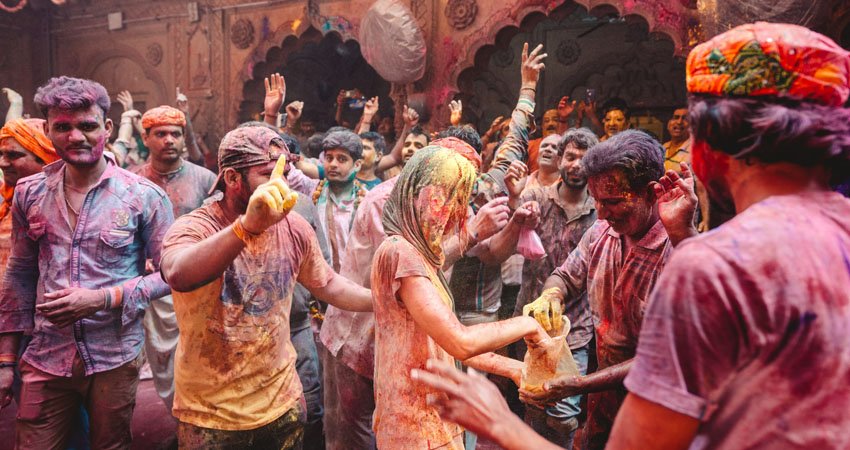 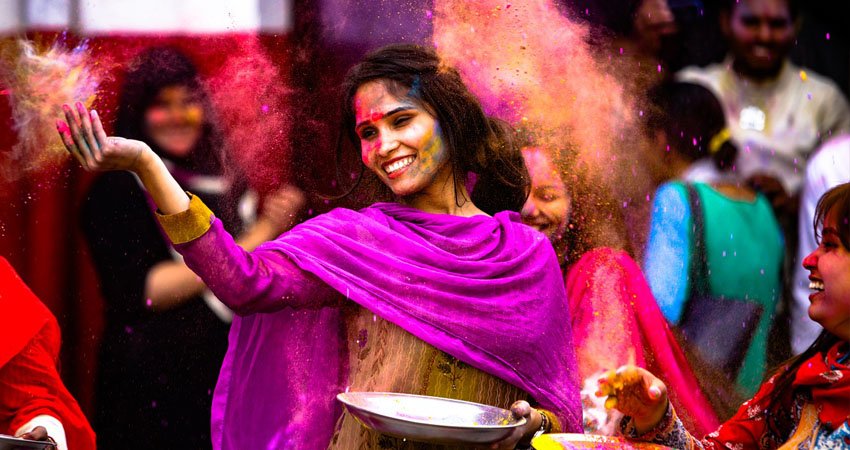 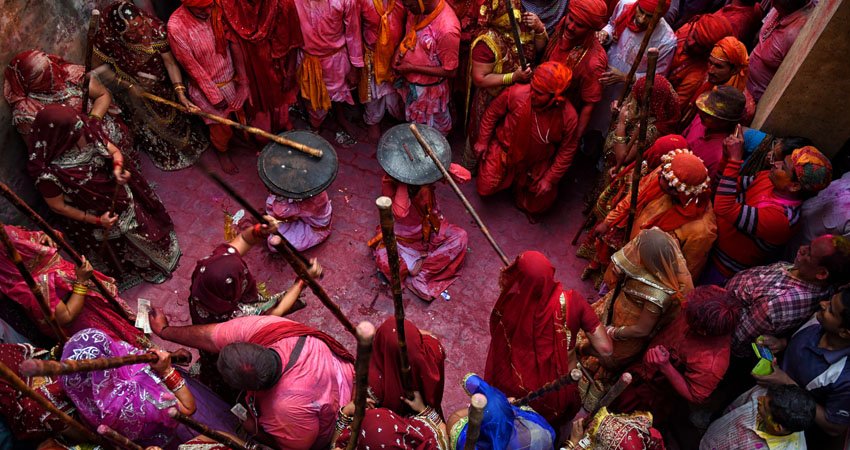 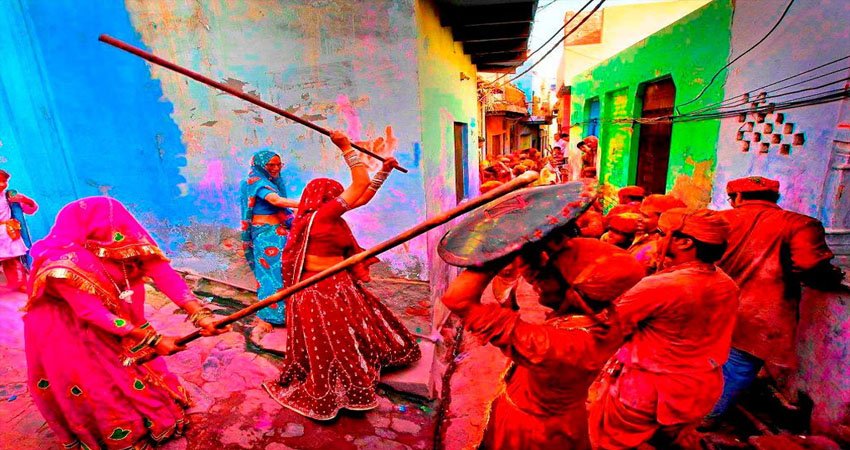 Mathura Holi : Special Event at Krishna Temple and all over Mathura Vrindavan

India Holi, the festival of vibrant colors, of showers of joy and happiness all around. It symbolizes the advent of Spring season in India and what more, it is the favorite festival of Lord Krishna. So what better place to get a glimpse of this wondrous festival than the land of Shri Krishna? Mathura is one place in India where Holi is celebrated with great zeal, fun and frolic.

It is certainly the ideal place to be in during this season! With colors and naughtiness in the air, lingering smell of sweets and happy colorful faces greeting each other, everyone wishes to be a part of this amazing extravaganza! It is a month long fiesta beginning in February and ending with the grand Mathura Holi Fastivle in March. It covers the whole Brij Bhoomi, from Gokul, Vrindavan, Barsana, Nandgaon to Mathura. Month long events at these places leave you mesmerized! And why not! Every Year International TV teams, Celebrated Dignitaries, Photographers & Tourists from all continents throng to Mathura to see this spectacle!

Barsana Lathmaar Holi followed by the repulsive action at Nandgaon is so exciting! 'Falen Ki Holi' takes place in the Falen village 40 km from Mathura, where a priest walks bare footed and bare bodied through a mound of fire! It is said the family of the priest is blessed by a saint to stay unaffected by fire, just like 'Prahlad'. Be sure, this mind boggling event will surpass all the chills and thrills you must have seen! Lastly, 'Dauji Huranga', which is played in the village of Lord Krishna's elder brother Baldeo who was also called 'Dauji'. It is going to drench your senses in a splash of colors!

Holi is a joyous festival and understandably, the Braj Bhoomi celebrates it in a special way! Here, every town has its own unique events to enjoy the festival! At Barsana, they have the Laddu Holi which is celebrated in Shriji Temple, a beautiful temple dedicated to Radhaji, in a big way.

The devotees gather in large numbers at Shriji Temple and Laddus (sweet balls) are thrown at them amidst colors, songs and dances. They have great fun and accept the sweets as a blessing with much devotion. They also shower flowers on the idols of Shri Krishna and Radhaji reminiscing when Krishnaji played Holi with Radhaji and showered her with flowers. It is not that Holi is all about fun! It also transmits a serious message. The colors used during the celebration must be natural, made from flowers to avoid any harm. Shriji Temple Holi in Barsana very famous.

Unique they aren - the Brajwasi (natives of Braj area) and they leave no stone unturned to enjoy their beloved festival and render it a unique glory! The Lathmaar Holi is not only a game of fun but it promotes women empowerment! Shri Krishna had great respect for women and always supported them in times of misery. So during Holi women get to demonstrate their power freely with a dash of fun.

It is said that Shri Krishna used to come to Barsana with his friends to play Holi with Radhaji but she and her friends took bamboo sticks (lath) to chase them away! The tradition has taken the form of a ritual! In the modern times, men from Nandgaon visit Barsana and the ladies shove them off with bamboo sticks. It is a fun game which is immensely enjoyable. So come, be a part and for once, feel blessed to get a light hit of the stick. Barsana Lathmar Holi is world wide famous and people come to celebrate all over world.

If Barsana can, how can Nandgaon be left behind? The next day is the turn of the Nandgaon ladies to take sweet revenge. It happens that the Barsana boys come to Nandgaon to immerse the women in a splash of colors but the Nandgaon women use their bamboo sticks shun off the men And the duel takes the form of a grand celebration which is famous worldwide.

There are showers of colors, sweets and other delicious items and a large gathering immersed in this lovable game where women attack men and men while saving themselves try to color them. So do not wait, just get ready to come to Nandgaon and participate in the Lathmar Holi of Nandgaon Really, you are going to love the atmosphere.

Rangbharni Ekadashi signals the advent of the great day And naturally it is celebrated with much fervor and excitement in one of the oldest and world famous temples of Vrindavan the Banke Bihari Temple. The natives and Shri Krishna followers assemble there and play with colors. It is a beautiful demonstration of the feeling of love, brotherhood and happiness! The brightness, colors and joy is a sight to see!

The Krishna Janmabhoomi Temple, the main temple in Mathura hosts a grand holi celebration. It holds the honor of being the place where Shri Krishna was born in a cell to Devaki Maa and Nand baba. Devotees from all round the world gather in huge numbers and pay respects to Shri Krishna and Radhaji and play Holi together! They also indulge in the Lathmaar Holi on this occasion. Women take out their bamboo sticks and attack the men in a light hearted game. The air is filled with colors, colors and colors all around! A cultural program is also organized to mark the event. There is also a big holi celebration in Mathura held at the famous Shri Dwarka Dhish Temple at Mathura. So do visit Mathura and fill your heart with the enduring colors of happiness!

The time has come for Holika Dahan! A pyre is prepared on the eve of the Holi festival symbolizing the burning of evil (Holika). The legend goes that her brother 'Hiranya Kashyap' was immensely angry with his son Prahlad and asked the evil minded Holika to take him in her lap and sit in the fire as she had a boon to stay unaffected by fire! But 'Prahlad', a Vishnu devotee was saved and 'Holika' got burnt instead this win of goodness over evil is celebrated by burning this pyre and taking a round of it. It is celebrated with much fanfare in Mathura and the whole 'Braj Bhoomi'. It is also time for family reunions and people worship together and share the joy of love and brotherhood.

Ye! Here we are The big Day - Holi Dhulandi represents Color play! The whole Braj area gets united to celebrate Holi! Red, Green, Blue, Pink and Purple, the air is filled with the colors of happiness, joy, love and brotherhood! The people throw rich colors 'Abir' 'Gulal' at each other and immerse them in a splash of colors with color guns! The chants of Happy Holi and Holi songs can be heard in the streets and Holi Tolis (group) are seen in a mischievous mood. No differences, no distance just fun and good cheer everywhere. Really, the Braj Holi is just the best and it is not for nothing that it is famous around the world! Come, be a part of the Holi celebrations and take the Braj Bhoomi, home!